Innovative Americas, by DSGN AGNC and partners, is a discussion and exhibition space at the World Urban Forum 7 in Medellin, Colombia that engages urban discourse by looking at projects, ideas and debates emerging out of the Americas. The focus of Innovative Americas —created in partnership with Next City— is to discuss some of the World Urban Forum’s key concepts: Justice, Equity and Resilience.

Exhibition booths are often anonymous spaces with little potential for meaningful interaction. The Innovative Americas booth is designed to facilitate discussion and questioning through flexible elements that allow multiple uses. The bulk of the exhibition is held in cubes that can be taken out of their frame, examined and used as seating. Panels with working descriptions of the key concepts —Justice, Equity and Resilience — fold down to allow anyone to respond and question those definitions. We invite visitors to the World Urban Forum to come and work together to deepen and complicate preconceived notions around the three key concepts. The booth can also be thought of as an ever-changing game, inviting the spirit of play that is part of co-creating a city.

Furthermore, traditional exhibition booths are often made from short-term construction components that are discarded after events. All the elements in the Innovative Americas booth are designed for re-use to support the missions of community and arts groups in Medellin. We have partnered with such groups in a few comunas and they will be using the elements from the Innovative Americas booth long after the World Urban Forum has ended. 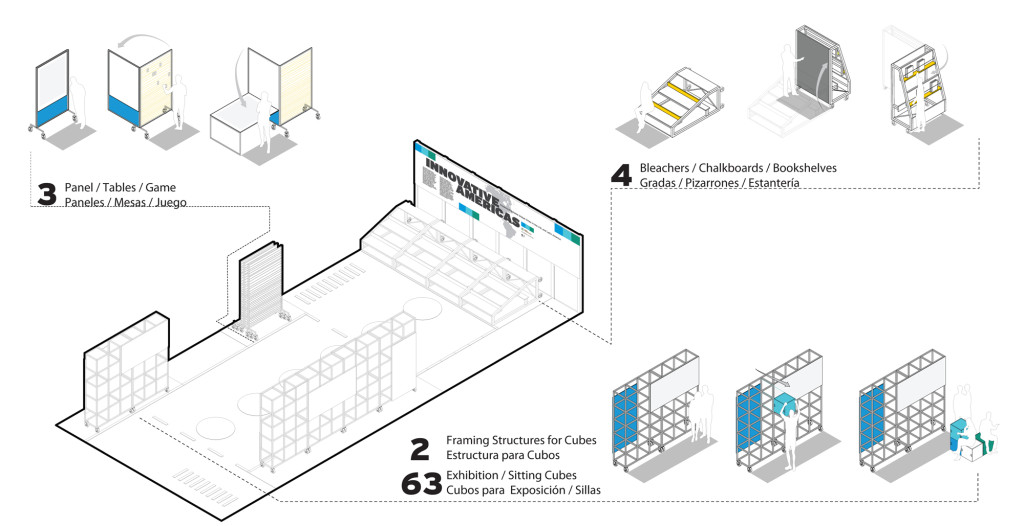 Innovative Americas is designed around a series of moveable and transformable elements, which include: 63 Exhibition/Seating Cubes, Framing Structures for Cubes, 3 Panel/Tables and 4 Bleachers/Chalkboards. Together, the elements that comprise the design create multiple ways to use the space and to discuss and share ideas about the key concepts of the exhibit and the World Urban Forum: Resilience, Equity and Justice.

Built in Medellin, two large metal structures serve as a framing element to the exhibition space as well as a place to store 63 seating and exhibition cubes. The cubes have images and information about urban projects from South, Central and North America. The cubes can be removed from the framing structure to serve as seating and catalysts for conversation.

Three movable panels contain working definitions of resilience, justice and equity (themes of the World Urban Forum). Those panels then fold down to create tables, allowing for discussions and work around those definitions. The panels also unfold to reveal a series of strings where visitors’ definitions and ideas about each subject can be hung.

Four flexible and movable bleachers serve as the main seating area for lectures and discussions. The bleachers can also be placed upright to reveal a chalkboard underneath. When stood upright, the seating area turns into a bookshelf.

The final element of the design is the ground itself. Throughout the week we will be changing the lines on the floor to reflect the areas within the booth with highest traffic, where significant conversations have taken place, etc…

AFTER THE WORLD URBAN FORUM
All the elements in “Innovative Americas” are designed fore reuse, and will stay within the cultural community in Medellin. We are working with partners in Medellin so that all elements continue to be used long after the World Urban Forum.