By now it is a well-worn trope that Williamsburg, Brooklyn, has dramatically transformed in the past 10 years as a glut of luxury housing and other high-cost amenities have created wave after wave of displacement, hitting minority populations hardest.

Along with the waves of displacement, many local resources including buildings and social programs have been demolished and discarded to make way for luxury housing developments that promise new amenities.

What is less understood is how much of this change was spurred through negotiations of public policy — using tools such as the 2005 rezoning of large areas of Williamsburg, including its waterfront. As part of the rezoning negotiations, the Bloomberg administration promised the inhabitants of north Brooklyn a 28-acre waterfront park in lands around the Bushwick Inlet. This park has yet to be built, partly due to budget constraints. Which begs the question, if the rezoning was sold as a way to increase tax revenue created by luxury housing towers along the waterfront, why is the city still unable to buy the land needed and construct the park as promised?

Los Sures, North imagines a new skyscraper and park for one section of the promised and still unbuilt Bushwick Inlet park. This skyscraper, rather than holding luxury condos, is composed of relocated buildings that are set to be demolished, allowing populations that would otherwise face displacement to relocate yet not leave their neighborhood.** This, however, is a new kind of vertical neighborhood that embraces change as it is continuously built and grows in resistance to an old neighborhood given over to developers. The continuous construction of this vertical neighborhood is fueled by a local workforce and financed by large excise taxes on the nearby luxury housing.

Saving the neighborhood by continuously rebuilding it.

**The rendering of Los Sures, North features a selection of the hundreds of residential, civic and industrial structures demolished or majorly remodeled in Williamsburg since the 2005 rezoning. 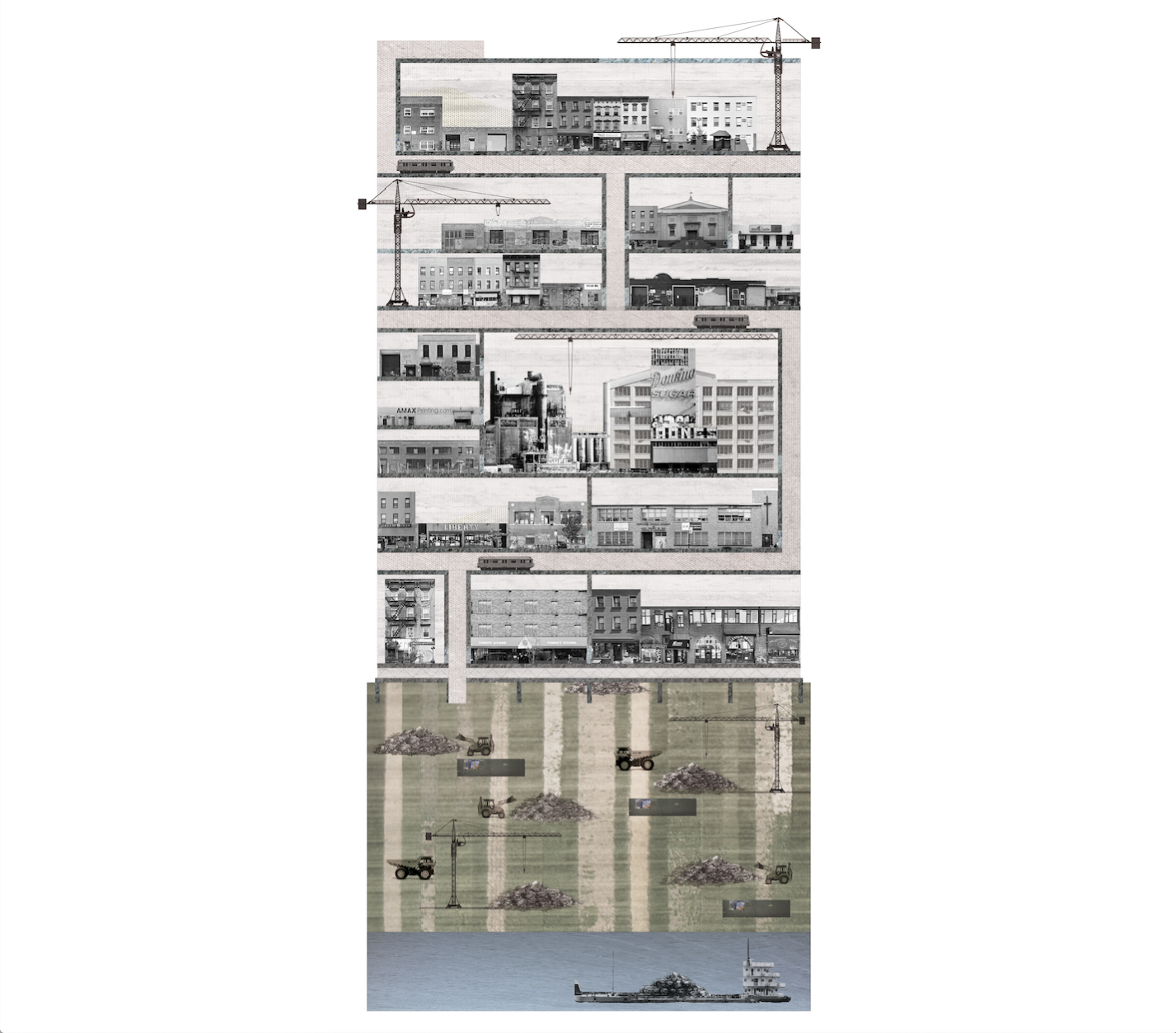 MORE ABOUT “WORK IN PROGRESS SHOW”:

Description:
New York City is experiencing a booming construction phase. Real estate has become one the most powerful driving forces in the social and urban development of the city. Constrained by laws, policies and codes, market forces and financial structures, and limited architectural responses, the city is being homogenized and transformed into a space for the financial elite, affecting individuals and communities throughout the five boroughs, and changing the social and cultural fabric of the city.

Green construction fences, with their illustrated LL47 “Work in Progress” signs, often present the first visual cues of this process, and of its underlying economic and legislative causes.

This fall, a green construction fence will close Storefront for Art and Architecture and a LL47 sign will illustrate its future development. On these new walls, over 25 LL47 signs commissioned to artists, designers, and architects will depict alternative visions of ongoing construction sites throughout New York City, offering a space of reflection and critique of current development practices and the architectures that build them. A photographic survey of works in progress throughout the city, will depict this new naturalized green New York landscape, inviting us to think about the city that is growing with our times.

Work in Progress is curated by POWERHOUSE in collaboration with Storefront for Art and Architecture, with photographs by Naho Kubota and design by PARA Project. Individuals interested in contributing ideas and additional LL47 signs can download the submission template (available in the documents section above), and send their work to workinprogress@storefrontnews.org Contributors can also tag their photos with #workinprogress and #storefrontnyc.

Curation:
POWERHOUSE and Storefront for Art and Architecture