Corona’s Plaza is a comprehensive research and design project at Corona Plaza, Queens. The project team will work using critical participatory processes and engagement with the local community to study and propose a series of policy, community and physical designs. The process of involving diverse community members — including immigrant communities that are frequently uninvolved in the planning and development process — seeks to have community members determine the long-term development of the site, and to exert ownership over public space to ensure its long-term functionality and importance within Corona.

The Corona’s Plaza project will included these actions:
DIAGRAMMING & MAPPING
Diagramming and Mapping of policy and design issues that prevent Corona Plaza from being used to its fullest potential by local community groups. This will be done along side local residents and groups working in issues facing the community in Corona. (Action 1)
SHARED PLAZA GAME
Comprised of community groups and individuals working in Corona. This Public-Space Cooperative will look at the issues and boundaries identified in the Diagramming and begin to advocate for changes as well as help formulate design and policy proposals.
PROPOSED CORONA PLAZA PAVILION
An architectural-scale pavilion that will serve as a prototype of the design proposals in the Corona’s Plaza Community Action Plan. The pavilion will also serve as a place for community programming and engagement. The pavilion is mobile and after the summer it can be used anywhere in Corona. 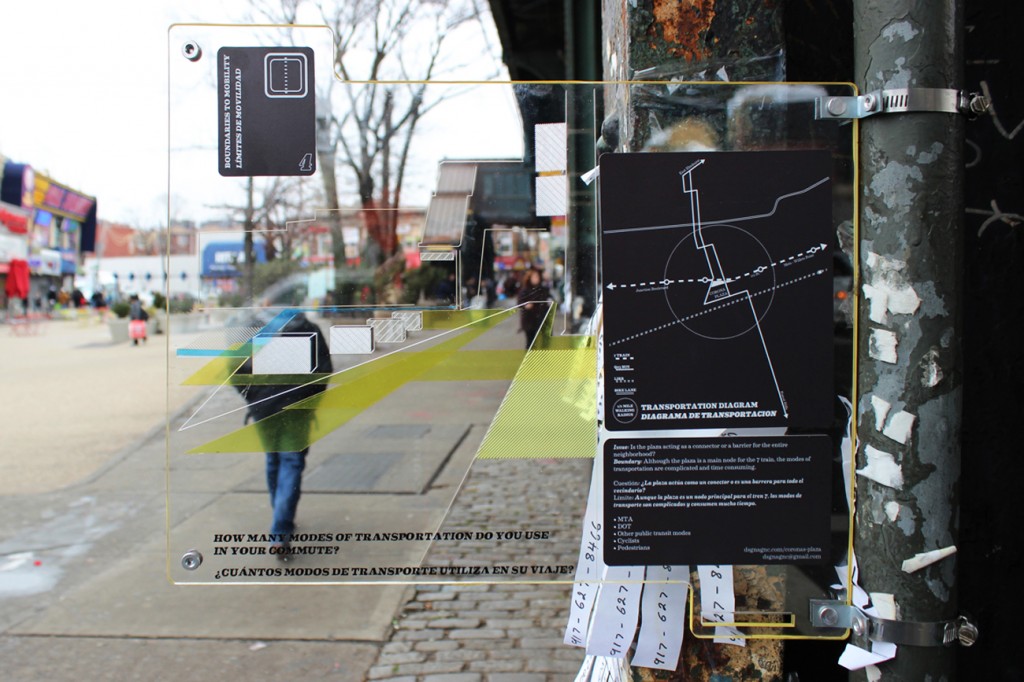 The Diagram and Research Action is the initial phase and serves to identify the issues and hidden urban conflicts affecting the community of Corona and thus the plaza. Our approach looks at the spatial dynamics of Corona Plaza as an exemplification of the socio-political issues within the community. As part of a series of conversations with the local community, this research will result in a design for a space that builds social connections and provides opportunities for recreation, education, commerce etc.

The Corona’s Plaza Diagram and Research Action was comprised of six street signs attached to the infrastructure of the plaza — the 7 train, street posts, fences, etc…
Each of the signs has:

All the boundaries and questions arise from research conducted in Corona. The questions are meant to give us a deeper understanding of the community. Some of the questions, like number 3, are polemical in nature and meant only to challenge assumptions some make about the neighborhood of Corona — i.e. this New York Times article: Roosevelt Avenue, a Corridor of Vice. Our goal is to advocate for and design an open plaza that caters to the entire community.

The information from the signs helped us develop “A Shared Plaza,” a large-scale bring together inhabitants and organizations in Corona to collectively develop a cohesive statement of values and list of priorities for Corona Plaza’s development. The game consisted of fifteen 40-by-48-inch game “pieces”. We designed three different pieces for each topic using readily available and inexpensive materials such as wood palettes and milk crates. Each piece represented related functions. For example, the Community Programming pieces contain a set of bleachers and the Local Economies pieces can serve as tables to set up around the plaza. Finally, the “playing field” consisted of tape on the ground that allowed only twelve pieces to be placed at once on a three-by-four grid.

The game was played on a snowy day in February 2013 with a crowd that numbered consistently around thirty, even in the less-than-perfect climate. Together, we discussed the future of the plaza—even its most contentious issues—and moved the pieces around as we gave prompts for discussion. We talked about the very different experiences men and women have in the space, we talked about policing and how stop-and-frisk indiscriminately targets young men from the neighborhood, and we talked about fears of gentrification in relationship to the Mexican vendor who sets up an illegal food stand to sell her tamales every day.

The conversation lasted several hours, and at the end of the day no final “designs” were made for the plaza. Instead we talked about the type of actions it would take to continue this conversation on social and spatial issues. When the commission ended, I gave the Queens Museum and the RBA Group (the landscape architecture firm chosen by the New York Department of Transportation to design the final plaza) a list of the issues of most importance to local residents. I also made a simple design recommendation to create a flexible open plaza with opportunities for communal conversations. To help foster future dialogue, I have just begun designing a new series of panels and furniture pieces that can attach to existing infrastructure. These panels will serve to hold information on larger systems affecting the neighborhood to help with the ongoing discussions about the plaza by local residents.